If you specify an assembly as requiring an internal arc fault capability in accordance with IEC/TR 61641; what can you expect, what benefit will you get, are there more effective options for the particular application. MODUTEC provides some clarity.

Assemblies that are correctly operated, properly maintained, well designed and verified in accordance with the IEC 61439 series very rarely incur an internal arcing fault in service. However, as fault levels increase, the potential consequences when such a fault occurs become more severe. This, together with the ongoing pursuit for ever greater safety, is bringing internal arcing faults within assemblies to the fore. In the belief that their personnel will be ‘safe’, increasingly, users of low-voltage assemblies are calling for them to comply with IEC/TR 61641; Enclosed low-voltage switchgear and Controlgear assemblies — Guide for testing under conditions of arcing due to internal fault. Since the document is a TR (Technical Report) it cannot be ‘complied with’ in the way that a full Standard can. Whilst in some circumstances specifying that equipment has to ‘comply’ with IEC/TR 61641 will lead to greater operator safety and reduced down time in the event of an arcing fault within an assembly, it is not a ‘cure for all ails’. Before specifying ‘compliance’ with this requirement an objective assessment should be carried out considering the whole application to determine if ‘compliance’ with IEC/TR 61641 brings worthwhile benefits. The factors to be considered are varied and at times very subjective. They include: what enhanced safety does ‘compliance’ with IEC/TR 61641 offer for the application being considered; when is an internal arcing fault most likely to occur, and; are there better options for increasing operator safety and process security. Making the right choice in respect of an assembly ‘complying’ with IEC/TR 61641 is complex. It requires a good understanding of the intended application for the assembly, knowledge of the design and use of assemblies and a detailed understanding of IEC/TR 61641. In addition, a skill in assessing risks is necessary. MODUTEC seeks to share this guide to assist users of low-voltage assemblies in making the right choice in respect of an internal arc fault capability for their application. Causes of internal arcing faults Internal arcing faults within assemblies occur for of a number of reasons, for example; None of the foregoing should occur. Virtually all internal arcing faults within an assembly are as result of some failing that can be avoided by other means. Effects of an internal arcing fault: When an internal arcing fault occurs within an assembly a large amount of energy is released in a fraction of a second. The amount of energy released is a function of the prospective short circuit current, the arc resistance and the time it takes the protection upstream of the fault to operate, or, the time taken for the arc to self-extinguish. Typically, with a 400V system the arc fault current is 60% of the prospective short circuit current. If the prospective short circuit current is reduced and/or protection upstream of the fault operates quicker, e.g. current limiting type compared with the definite minimum time protection, the energy released and the consequences of the arcing fault are significantly reduced. An arc within an assembly creates a very high temperature and a conducting ionised gas. Assuming the assembly is enclosed, the energy released causes a high gas pressure within the enclosure, often ‘blowing’ covers off or doors open. Generally, the magnetic forces associated with the fault current drive the arc away from the source of the current and towards the extremities of the assembly. Unless the arc is blocked by robust barriers it will generally seat at the remote end of the main busbars or other main conductors. On some occasions the arc will burn clear before the upstream protection operates. Generally, it will cause significant damage to the assembly; allowing the emission of the high temperature ionised gas and vaporised metal. Gases and vapours emitted can, if a person is in the path of the emissions, cause serious burns and in extreme cases, death. Note of caution: Unfortunately, low voltage arcs are not totally predicable. Seemingly identical conditions can give different results. On one occasion the arc can self-extinguish, on others, it can persist until interrupted by the protection. Alternatively, the arc can propagate in different ways for apparently identical conditions. Options within IEC/TR 61641: The current edition of IEC/TR 61641 is a considerable advance on the earlier issues. Previously only the effects of arcing at the front of the assembly were considered; now, unless the manufacturer advises otherwise, arcing on all sides (front, rear, left and right) must be considered. In addition, previously a manufacturer need only consider the effects of arcing on the load side of outgoing functional units. Now, the complete assembly must be considered. As a result, claims of meeting the requirements of the earlier versions of the TR need to be treated with caution.

Different installation conditions are considered within IEC/TR 61641. The TR recognises that assemblies can be installed in positions where they are accessible by people without specialist electrical knowledge (unrestricted access), or, in areas where access is limited to authorised persons (restricted access). With unrestricted access the TR assumes that anyone near the assembly can be wearing light summer clothes, whereas with restricted access it is assumed personnel will be dressed in heavier work wear. Anyone specifying an assembly with an internal arc fault withstand capability should identify which type of access is applicable. Unless otherwise indicated, the manufacturer will assume the assembly is to be installed in a restricted access location, for example, a locked substation with controlled access. It should be realised that it is not always possible simulate all the conditions that can produce arcing faults in service and that the arc does not always behave in a repeatable manner. Unfortunately, arcing faults are not totally predictable and repeatable. To take account of different application needs the Technical Report defines three Arcing Classes for arc fault tested assemblies: Arcing Class A: assembly providing personnel protection under the arcing conditions defined in the Technical Report. Arcing Class B: assembly providing personnel protection and confining the arc fault damage within the assembly is limited to the zone within the assembly where it was initiated. (Effectively, a zone is defined as a circuit or compartment.) Arcing Class C: in addition to meeting the requirements of Arcing Class B, the assembly, following isolation of the damaged circuits the remainder of the assembly is capable of emergency operation. In addition, there is a further class; Arcing Class I. This takes a totally different approach. In the unlikely event of an arcing fault within an assembly Arcing Classes A, B and C focus on managing the effects of the fault, whereas Arcing Class I adopts the philosophy of ‘prevention is better than cure’. Arcing Class I seeks to reduce the risk of an arcing fault being initiated by individually enclosing, as far as practical, each conductor in solid insulation The Arcing Class I can apply to parts or all of the assembly. Areas offering protection in accordance with Arcing Class I are termed ‘arc ignition protected zones’. With some limited exceptions, the insulation must provide protection against contact with live conductors in accordance with IP 4X of IEC 60529 and withstand a power frequency dielectric test 1.5 times the normal test value for an assembly. Limitations of testing in accordance with IEC/TR 61641: Internal arc fault testing of an assembly in accordance with IEC/TR 61641 is carried out with all doors and covers closed and correctly secured. Unless there is a separate agreement between the user and manufacturer, no consideration is given to the effects of any toxic gases or loud noises that may be emitted. Risks associated with maintenance when doors or covers are open and someone working inside the assembly, or personnel exposure to the top or bottom of the assembly, are not considered. The principle focus of IEC/TR 61641 is, in the event of an arcing within the assembly, the safety of personnel adjacent to the assembly. The personnel may be operating external control devices, but the Technical Report assumes the assembly will be fully closed and that no one will be working inside the assembly at the time any arcing fault occurs.

A manufacturer offering an assembly as having an arc fault classification is obliged to provide details of its capabilities. The characteristics to be declared are set out in Clause 5 of IEC/TR 61641 and in general terms include, as applicable: 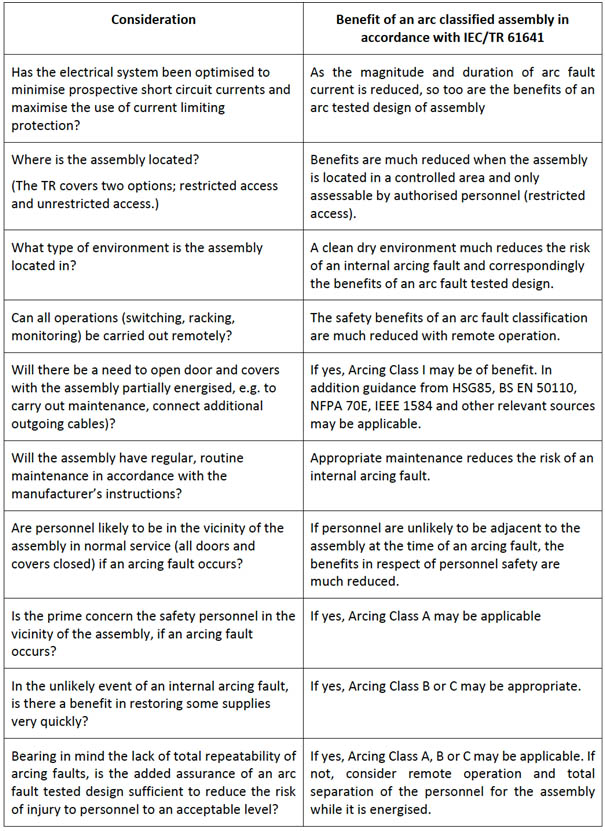 It also covers personal protection under arcing conditions, defining the ability of an ASSEMBLY to limit the risk of personal injury caused by the mechanical and thermal effects of an internal arcing fault.

Please note that this applies to enclosed low-voltage switchgear and controlgear assemblies when doors and covers are closed and correctly secured and it does not cover all effects which may constitute a risk, such as toxic gases.

MODUTEC Modular Switchboards Enclosure Systems are compliant with Internal Arc requirements as per IEC TR 61641. Handling this internal arc does not get limited to designing the panel to withstand the internal pressure developed during such a fault. It also extends to the subject of disposing these off. This gets done by carrying the arc products to a much safer place away from the people. This would involve adding the arc ducts over and above the standard MV panel. This carries away the arc products and also cools and absorbs the arc energy as it travels in the arc duct. Design and supply of arc ducts to suit specific installation site conditions will be taken up based on specific customer requirements

Our modular enclosures being flexible, adaptable and versatile, empowers the End User by accommodating structural changes in the switchboard, at any point in time!